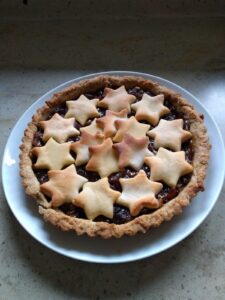 A seasonal treat for you, from customer Sue, who buys our flour in sacks!

Method
1 Put the butter, flours, semolina, sugar and a pinch of salt in a food processor or mixer and mix to form fine crumbs.
2 Beat in the egg and mix until it binds together.  Add a spoonful of water of milk if the mixture looks too dry.
3 Bring the pastry into a ball and flatten it into a disc and wrap in clung wrap or beeswax wrap and chill in the fridge for 30mins.
4 Heat the oven to 180degC, (160degC for fan ovens), or Gas Mark 4.
5 Remove pastry from the fridge and roll out on a floured surface to fill a 22cm flan tin.
6 Bake blind for about 20minutes  If the pastry looks damp remove the baking beans and put back in the oven for about 8 minutes.
7 Place the mincemeat in the base of the flan
8 Dust the work surface with a little cornflour or icing sugar and roll out the marzipan to about 1cm thickness.
9 Cut out star shapes or any other shape you may prefer
10 Layer the stars around the edge of the flan slightly overlapping them and then place some in the middle so that the top of the mincemeat is more or less covered.
11 Bake for about 45 minutes until the pastry is cooked and the marzipan is turning golden
12 Remove the flan from the oven and allow to cool for ten minutes before removing the flan from the tin into a serving plate.
13 Serve with clotted cream, yoghurt, brandy butter or ice cream.